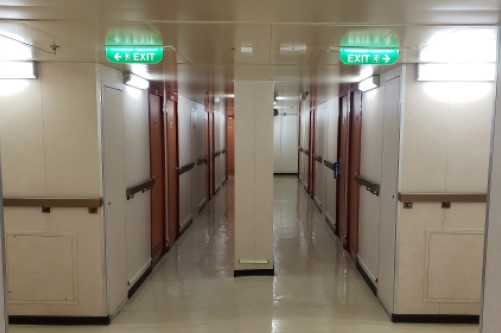 When I first started on ships, I was on a small ship only 600ish guests and 320 crewmembers. I was sharing a cabin with a lady from Thailand who didn’t say much to me but all through the night would say so very much to her husband. I was working on the bar, and I had been assigned to work the coffee shop in the morning. My shift would start at 5am much to my dismay as you know I do think morning is such a beautiful time however, it just comes at such an inconvenient time of the day, and then I would have a break at 9am for a couple of hours and so that was of course nap time for me.

It’s the second week onboard and I am still finding my feet and getting used to working so many hours and I see signs go up around the crew area saying crew rounds 9.30am tomorrow morning. I ask my roommate who was working a different shift from me what that meant, and she told me we had to clean the room. So, the day came, and I had cleaned my stuff and I was nervous to not do it right and so my wardrobes and drawers were clean and organised as well as I could I didn’t want to have any concerns. I didn’t know how to find cleaning products, so I cleaned my bathroom with makeup wipes, and it was all good to go. When I came back from work I got out of my uniform and into my pyjamas climbed into the top bunk that I lived in and closed my curtains so that when they came to check our room, they wouldn’t disturb me.

The next thing I know I am being shaken awake by this older man. Think about how you feel when you first wake up but now imagine that feeling with a big, bearded face you had never seen before right in front of you. I was startled and immediately became defensive. He said to me this is crew rounds and I said yes, and I have cleaned you should see the drawers so organised… And again, he said Miss this is crew rounds and now I was annoyed, and I said yes I understand I have cleaned would you look around? He then asked me to get out the bed and I told him no I am not appropriately dressed I will not. He asked me name and my department and left, and my nap time was ruined.

That afternoon the manager called me into his office and asked what had happened this morning. I told him some guy had come into my room and shaken me awake and asked me to get out my bed how rude was that. He told me some guy was the Captain and you shouldn’t be in your room for crew rounds. He told me that I would get into trouble for this, and I told him that since I had clearly not been trained as such it was not my fault and he sent me away.

It was an introduction into the world of ship Hierarchy for me and how that works the next time I saw the Captain I was a little embarrassed by tried to hide it and instead talked at him until he left. The way life is onboard for the position I was in it was not appropriate to chat with the Captain in any way other than respectful answers I mean after all I was just a crew member and on ships your rank makes a difference.

For those who are wondering about Crew Rounds over my career I have conducted many crew rounds myself and the purpose of them is to ensure that the crew member is looking after their cabin, that they have all their safety equipment and that there is no defects in their room that need to be fixed. Crew rounds is a requirement of MLC and is for the crew members benefit even though we all hate getting our cabins ready for it. In preparation a crew member should clean their cabin and place their life jacket and emergency card and head covering on their bed and their safety booklets should be in view. Any defects should be reported, and the crewmember should leave the room so that the inspector can have a look. Any issues are reported to the head of the department to have rectified. Remember when you were a kid and you hated cleaning your room and you thought I won’t do this when I am an adult. Well… on ships this does not end.